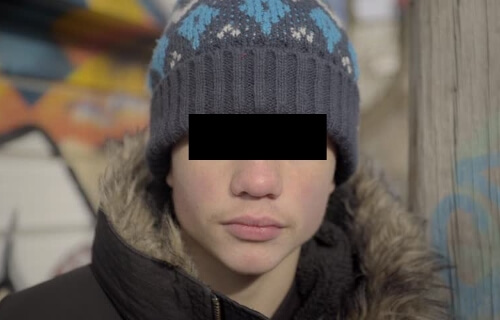 A young man of 22 walked into a local church and asked for some help. He said he was homeless and hungry. My wife was the one he spoke to. She talked to him as she gathered some food items to give him. She was saddened to hear he was in such a bad place in life as he took his food and walked down the road. When my wife got home she told me about Josh. We prayed for him and I knew God was calling me to do something.

The next morning I got up early, went to the creek area where I though I might find Josh. There on a bench next to the creek was a mass of blankets and clothes; I was sure somewhere beneath that mound of fabric was the young man in desperate need of help. As I stood next to him I called out, Josh, Josh,Josh. The top to the blanket opened and a knit covered cap peered through. Not quite enough daylight yet to determine who was there. I said Josh, you don’t know me but I’m here to help you. He slowly and cautiously arose and looked me over.

I told him if he was willing to walk a block away I would buy him a cup of coffee and some food, no strings attached. I just wanted to help. He began stuffing his blankets and clothing into a duffle bag, all the time asking me why would I be out here so early offering to help him when I didn’t even know him. I told him that I was directed to him as a result of him stopping by the church and God had placed him on my heart.

We got coffee and some breakfast, then he went into the restroom where he cleaned himself up and looked much more presentable when he emerged. We talked only a short while and I asked him if he would like to meet me again tomorrow. He asked again, why do you want to help me when you don’t even know me. All I could tell him is that I knew he needed someone and God asked me to be that someone.

Over the next few weeks we met many times and he began opening up to me about what he had gone through as a child, adolescent and young adult. I won’t share the details, but I will tell you what he suffered should never be inflicted on anyone. We developed a close friendship and soon he was working, safely housed and beginning

Josh told me his tooth was really bothering him and he was having trouble eating. I called my dentist and asked if he would take a look at my friend Josh. One look in his mouth my dentist said that Josh needs an oral surgeon right away to take out a badly infected and rotted tooth. One call later, we were at the oral surgeon’s office and he immediately asked Josh if he was willing and ready to have that tooth taken out. Josh said yes and 5 minutes later was under anesthesia. Knowing that this young man had just had emergency dental work and needed to be in a safe warm place for recovery, which is not out there on the bench by the creek. I took him to my cabin in Tahoe for a few days where he recovered well.

Shortly after this I found him a room in a friend’s house and a job from someone I knew. He was an extremely hard worker and very committed to the job. He rode a bicycle to and from, sometimes at midnight or in the rain, but never complained. He began going to my men’s bible study wherein he was truly accepted and loved by all there. He began really feeling good about himself.

It didn’t take long after we met to become close in friendship and he shared some of the deepest feelings and life’s tragedies with me. I was hurt for him hearing what he had to endure. He turned to drugs at an early age to create an escape from a bad life. Because of the need for drugs he alienated the few family connections he had; they could not trust him. As we worked on getting his life back on track, I helped him begin to heal some of the distrust with his family. They began to see his improvement, but were hesitant to believe it would last.

I see Josh as a success. There is so much more to our story together as he healed and moved forward in his life; they are beautiful memories we share He has maintained housing and employment, his family is once again trusting and welcoming to him. One day I received the most touching and heartwarming message from Josh; He told me I was like a Dad to him and he loves me. I couldn’t ask for a better reward.