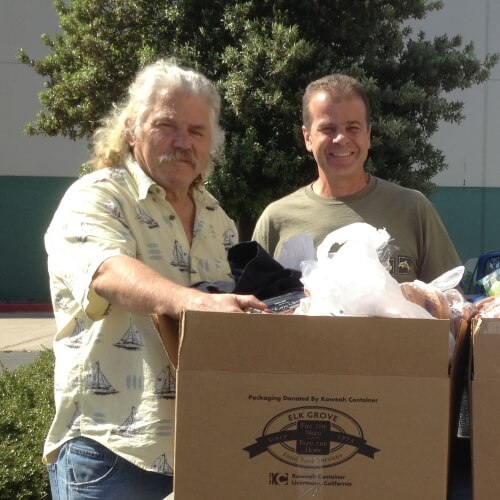 Robert was a nurse’s aid and his wife was a nurse. Life was going well and they were happy, but they started using drugs. It started slow, just to get high, but then it became more addictive and became an important thing in their lives; so important that they gave up caring about anything else. Soon they found themselves in a downward spiral. They lost their jobs, their house, their car, their family and their personal dignity; they became homeless.

Five years on the street as drug attics and alcoholics, fate finally caught up. Robert’s wife overdosed and died on the street. Devastating for Robert he became much more bitter and hateful, seeing the rest of the world as his personal enemy. Society helped this along by treating him as less than human. He has been beaten, kicked, spit upon and 3 times purposely run off the road on his bike. He suffered many physical injuries, broken bones and emotional hurts that were never treated.

10 years on the street Robert was a tough and calloused soul. He met Rene, the case manager at the food bank after months of him showing up for food she finally got him to talk with her. As she developed his trust she suggested that he meet me and have me become his mentor to help him get back on his feet. He scoffed and said “I don’t need a mentor, especially an ex-cop”. She persisted until he agreed to meet me.

Curled up sleeping on the conference room floor, Robert finally met me. He was just like a stray dog when he first met me; watchful and ready to strike out of fear but also cautiously hopeful that I would be that kind soul he needed. Robert and I met several times over the next few weeks and he began to trust me more and more.

Eager to get out of homelessness he was willing to do things with me to improve himself. Completely off drugs and alcohol, he was attending counseling session to help him with his emotional scars. He applied for a job and had an interview the next day, I arranged to pick him up and take him. During the night a thunderstorm rolled through and a soaking rain hit. The next morning when I arrived at Robert’s camp to take him to the interview he was disheveled and upset; all his clean clothes got soaked in the rain and the only thing dry was what he slept in. Determined to go to the interview, he said lets go and I’ll explain to them what happened. Upon arriving at the jobsite, the boss took one look at him and said you’re not ready for a job, comeback when you have your act together. Severely disappoint we left and I learned that it is hugely important to help those on the street to have stable housing, food and basic necessities first before continuing down the path for a better life; a transitional house was an important link in the chain.

We were waiting for final approval for the soon to be opened transitional house, the grace house, to open. I arranged for Robert to get a room in an emergency house until our house was open. When I called him and said I have a room for you, he said “well maybe tomorrow, I’ve got something going tonight”. I was confused, what is better than a warm safe bed? The next day when I picked him up and helped him gather his belonging he told me he was afraid to live in a house; he had been homeless so long what I thought would be welcomed, he saw as a scary proposition. He stayed in the temporary room for a little over a week.

Our crown jewel, a house completely renovated and nicely furnished was ready for our clients. We were going to house 5 people that were on the street! With lots of joy and celebration the house opened. What was once the ugly run down house was now the nicest house on the block. So much hope and love was in this house and we could now meet the very basic needs of our people while we got them on their feet. Robert was one of the first in the house. It wasn’t until months later he confessed to me he slept outside in the backyard for the first couple weeks at the house. It was too nice and he didn’t feel that a homeless guy deserved to be treated so well.

Robert eventually longed for a place of his own and applied for so many jobs, but due to many of his untreated medical issues he really just couldn’t find work. We went to medical appointments often and at 61 years old we decided to apply for disability for him. A great program in Sacramento, the SMART program assisted with the paperwork. He was originally denied, despite mountains of medical evidence. I’ve been told the fist application is always denied. We found an attorney to file the appeal. It took two years with two hearings and multiple medical exams to finally be awarded disability. Now with an income of less than $900 a month we found a room for him to rent. It took most of his money for rent and the rest for food and necessities; SSI recipients do not receive food stamps even though their income places them in the very low income level.

Robert has been an advocate for the HART program for us, speaking at council meeting and to other groups. He says to them that if it were not for HART he would have most likely been still living on the street or would be dead.